Mondragon 4: Outside the bubble

In the valleys surrounding Mondragon/Arrasate, roughly 60% of jobs are in the cooperative sector. These co-ops have a rule that top management can be paid no more than six times the starting wage. There are two exceptions: the CEO of the Caja Laboral (co-op bank) can make eight times base, and the overall CEO can make nine times base, for the privilege of leading something that is at least as complicated as General Motors. It sounds impossible to those of us used to multimillion dollar “bonuses” but it works.

This has resulted in a society that is visibly different from anything I’ve experienced before. There are no large cars, very few large houses on hillsides, no beggars, few visibly disheveled people or run-down housing, and very little in the way of conspicuous displays of wealth. On the other hand, there is graffiti everywhere – but mostly of a political nature.

I’m still waiting for data on exactly how the co-ops effect distribution of wealth, but my impression is that something significant is going on. When I do get solid information, you can be sure I’ll post it here.

Meanwhile, this weekend, we took a couple of trips to the coast. These were regions where the cooperatives are much less prevalent. Sure enough, things were visibly different. I’m going to note these as part of my touristy account of a very nice and relatively relaxed and un-educational weekend.

Saturday, we went to Gernika and Bermeo. Gernika was the location in which Hitler tested out carpet-bombing to help his buddy Franco during the Spanish Civil War. It is also the ancient seat of Basque government and the current site of the assembly of Bizkaia (one of three provinces that make up the Basque Autonomous Region).

where it all happens

Then we saw a tile reproduction of Picasso’s famous painting before heading to the Peace Museum. It was a short visit, but it became clear that there was more of a wealth disparity here. On the one hand were some large walled estates in the center of town; on the other were some run down apartments on the edges and several half-built developments. Like California, Spain had a real estate boom that is now going horribly wrong. The Basque Country is not immune from this mess -not even in Mondragon – and it seems that the damage is worst in areas with high tourist value. No surprise there.

Not surprisingly, lots of large construction projects are underway there and on the rugged coastline of the area. I couldn’t tell if they were stalled, but they seemed alarmingly common and I would be surprised if they are all going well. One huge project had a lone holdout against urban renewal. 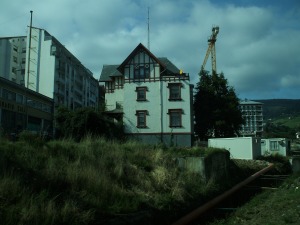 there goes the neighborhood, literally

The town also had a very curious little slum area. it had an amazing view but still felt very sketchy, with lots of trash on the ground. I took one picture and left.

at least the view is good

There was a huge festival underway, with many hundreds of people partying in medieval garb. That made it hard to judge what is usually going on, but I saw quite a few African immigrants selling pirated DVDs or a mix of purses and umbrellas.

Sunday, we visited Donostia/San Sebastien. This is a much larger city, close to the French border. It is a major tourist attraction, and for good reason. It is a stunning port, and very cosmopolitan. For the first time since Barcelona, I had a strong sense of being in integrated Europe, rather than in a specific and relatively homogenous nation.

We also saw significant signs of wealth disparity. The buildings along the harbor were much fancier than those inland. This is hot real estate, and has been for centuries.

There were people with fancy clothes and jewelry. There was a beggar making the rounds (although nothing like Barcleona, where I encountered a gauntlet leaving church). There were numerous tourist stores. There were boutique stores from the US, as well as a McDonald’s.

At the same time, I don’t want to sound overly critical. Donostia is a beautiful city, and had a really incredible number of people out strolling and visiting. I spent a couple of hours sitting in a plaza cafe, watching dozens of kids play, a huge herd of teenagers gathering and then leave as a group, and everyone interacting.

Sunday afternoon in the new plaza

I should also note that during the entire weekend, including drives through a half-dozen lovely ports, I did not see a single mega-yacht. I didn’t even see anything over 30 feet, except for fishing boats that were maybe twice that. The coast has some wealth, but nothing extreme.

It was good to get out of the valley, and get a broader perspective on what is really going on in the Basque Country. Of course this is not a scientific survey of any sort, and I look forward to supplementing this with some data. But impressions do count for something.

This entry was posted in Uncategorized and tagged Basque, Euskadi, Mondragon, wealth distribution. Bookmark the permalink.